Published by The Copp Clark Company, Limited. [1933]., Toronto, 1933. Hardcover. Condition: Very Good. This is a First Canadian Edition, from plates of Scribner first edition, with the Scribner “A” on the copyright page. Octavo, original black cloth titled in red on spine & front panel.

There is a split in the binding between the back endpaper and the pastedown page (see the picture in the image gallery for example of this), however, all 307 pages are secure to binding. 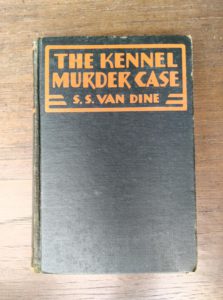 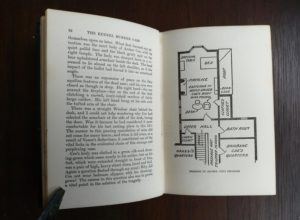 It was made into an acclaimed movie:

A Warner Bros. film version of The Kennel Murder Case appeared in 1933. The film was directed by Michael Curtiz and starred William Powell as Philo Vance, reprising the role after appearing as Vance in three earlier films for Paramount, and Mary Astor as Hilda Lake, the victims’ niece. Many film historians (including William K. Everson, who pronounced it a “masterpiece” in the August 1984 issue of Films in Review) consider it one of the greatest screen adaptations of a Golden Age mystery novel, and rank it with the 1946 film Green for Danger.

The Kennel Murder Case was remade by Warners in 1940 as Calling Philo Vance with James Stephenson as Vance and William Clemens directing.

About the Author and this book (a review from www.goodmystery.com):

S. S. Van Dine was a pseudonym used by American art and literary critic Willard Huntington Wright (1888-1939), primarily to conceal his identity when he wrote detective novels. Like Ellery Queen, S. S. Van Dine is both author and a character, as he appears as Vance’s quiet live-in companion, legal adviser, and the narrator of all twelve Philo Vance mysteries.

Wright was an important figure in artistic circles in the years between the wars, and his younger brother, Stanton Macdonald-Wright, was a respected painter, one of the first American abstract artists, and founder of the school of modern art known as “Synchromism”. Willard and Stanton were raised in Santa Monica, California, where their father owned a hotel. Willard, a largely self-taught writer, attended St. Vincent College, Pomona College, and Harvard University without graduating. At age 21, Wright began his professional writing career as literary editor of the Los Angeles Times, where he was known for his scathing book reviews and irreverent opinion. He was later mentored by H.L. Mencken and an advocate of Theodore Dreiser’s ‘naturalism’. He became editor of the literary magazine ‘The Smart Set’ in 1916 but was soon fired for provoking too much interest in sexually explicit fiction. He also wrote on the philosophy of Nietzsche and several volumes on modern art, and was one of the first to recognize the talent of Cezanne. Unfortunately, during the war, he wrote against the British cause and got himself banned from journalism. In order to make a living, he secretly began writing detective stories in the 1920s, a genre he had earlier derided, and later added a few critical articles on detective fiction. He was fairly successful at writing screenplays during the early days of Hollywood, including the scripts for several Philo Vance movies, but by the late 30’s his heavy drinking had begun to badly effect his health. It finally provoked a fatal heart condition in 1939.

Philo Vance proved immensely popular, he was an American sleuth and dilettante, in an era dominated by sophisticated British crime fiction. Vance first appeared in the 1920s, then graduated to the movies and a long career on the radio. He was one of only a handful of American detectives to really hit it big during the Golden Age of the mystery genre, on a par with Ellery Queen, who had, in part, been based on Philo, by the two cousins from Brooklyn, Frederic Dannay and Manfred Lee. The only others Americans to reach this lofty height were Dashiell Hammett’s Sam Spade and, a little later, Raymond Chandler’s Philip Marlowe.

The Kennel Murder Case was turned into a very successful, critically acclaimed, movie by Warner Brothers in the same year it was published. It was directed by Michael Curtiz, and starred William Powell as Philo Vance and Mary Astor as Hilda Lake. Powell had already played the Philo Vance role three times for Paramount prior to this outing. Critic William K. Everson, pronounced it a “masterpiece” (August 1984 issue of Films in Review) and considers it one of the greatest screen adaptations of a Golden Age mystery novel, ranking it with the famous 1946 film ‘Green for Danger’, based on the Christianna Brand novel.

The first murder in ‘The Kennel Murder Case’ is one of the best classic locked room setups ever written. Archer Coe is found sitting in an easy chair, next to his writing desk, with a gun in his hand, inside his completely locked and bolted bedroom. He can be seen through the keyhole, obviously dead, which clearly suggested suicide – but Philo Vance knows Coe and doesn’t buy it for a second. On closer examination, the police, DA Markham, and the incredibly languid, chain smoking, Philo Vance discover a bullet hole in his temple, as expected, but also find that the victim had been bludgeoned with the proverbial blunt object of mystery fiction, then stabbed with some slender style of sharp implement – just for good measure! This set of circumstances makes suicide quite impossible – but there is no doubt whatsoever that Archer had been alone inside that securely locked room at the time when his death was discovered! In fact, it soon becomes apparent that the small stab in the back was the actual cause of death, and that Archer Coe was shot hours after being murdered! It also appears that someone carefully removed his clothes and then buttoned him into his silk dressing gown – but forgot to remove his heavy shoes, though his slippers were ready at hand! Then there is the mysterious matter of an unrecognized badly injured, champion quality, Scottish Terrier, locked inside this deadly house where no one was a dog fancier!

The list of potential suspects is fairly small, as there is no sign of an intruder – and such a bizarre scene could hardly have resulted from a robbery gone wrong! There is Archer’s brother Brisbane, who often argued with Archer, but had apparently taken himself off to Chicago on the eve of murder. A niece and ward, Hilda Lake, who also could not abide Archer, and has a rather flimsy alibi. A visitor from a Milan museum, one Eduardo Grassi, who is attempting to convince Archer to sell some of his priceless collection of Chinese porcelain – and also has a useless alibi. Another possibility is Raymond Wrede, a friend of the family, who lives on the other side of a vacant lot. Wrede regularly visits and badly needs to marry Hilda, despite Archer’s fervent opposition. To complete the field there is the Coe’s butler Gamble, and a rather suspicious Chinese cook, Liang Tsung Wei, who might be seeking revenge for shady Chinese artifact deals and tomb robbing.

All the members of the household have plenty of motive, but the DA can’t charge anyone with a clearly impossible murder! Then a second body turns up in a closet, further narrowing the odds that your choice of the suspect will be the actual murderer! Detective Heath and DA Markham are incredibly slow-witted and inept. They simply surrender the case to the elegant Philo Vance, who is, coincidentally, an expert in Chinese ceramics and just about every other topic! Readers of his earlier novels will be quite surprised to discover that Vance now owns a kennel in New Jersey, where he spends considerable time breeding – you guessed it – Scottish Terriers! Vance’s favourite occupation appears to be performing as a walking, talking encyclopedia that prattles on, boring the police, and all others within range, with a rather irritating monologue. Of course, it is just this type of specialized knowledge, combined with his Sherlock style encyclopedic knowledge of past crime, and his razor-sharp logic, that eventually solves the case. Remarkably, in all twelve novels, no matter what the subject, Vance is always the expert, and always manages to make New York’s finest look ridiculous. It is actually quite incredible how he shunts the officials aside, treating them like his private staff in an enquiry agency, and all without a single word of protest! He also regularly pockets the evidence, completely destroying any hope of proving the chain of custody in court! In one instance, he actually leaves the murder weapon lying about, in a place where the murderer can retrieve it for his next murderous attempt! If you are a big fan of correct CSI procedures, you might want to avoid this novel!