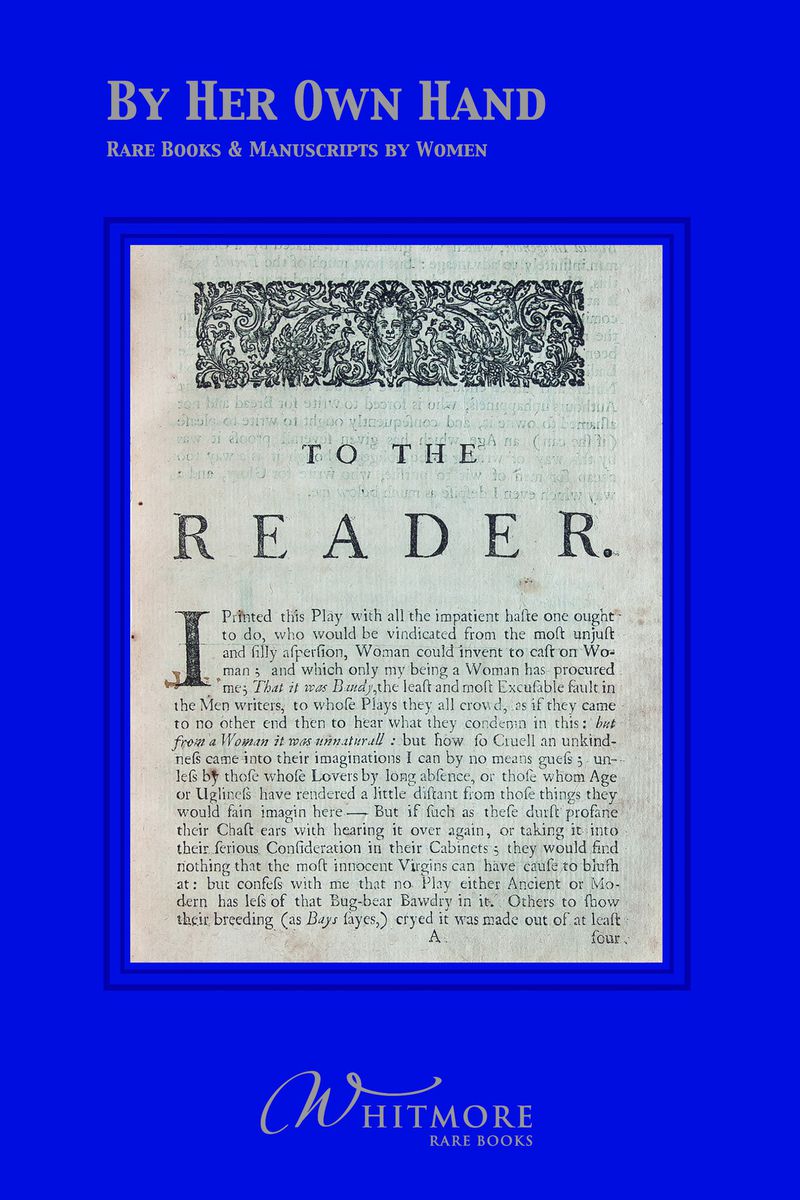 This article was recently published in The Los Angelos Times. It was written by Eva Recinos.

Whitmore Rare Books in Pasadena feels almost like a library, there’s dark wood furniture, leather couches and Midcentury Modern accents throughout the space. But the real treasures are on the shelves.

Stowed away behind glass cabinet doors, the shelves display a number of rare pieces, including first edition, signed copies of volumes such as Charles Lindbergh’s “The Spirit of St. Louis” and Daphne du Maurier’s “Rebecca.” Yet there was still something missing among the tomes: the voices of diverse communities from decades or centuries ago. To fill that void, rare book and manuscript specialist Miranda Garno Nesler and Dan Whitmore, founder and president of Whitmore Rare Books, created a new publication, By Her Own Hand, that highlights the rare written work of women and women of color.

Whitmore Rare Books generally releases catalogs bi-yearly, with a focus on “high spot material” — a recent catalog includes everything from a reproduction of an 1866 printing of Lewis Carroll’s “Alice’s Adventures in Wonderland” to a selections of George Sale’s 1734 English translation of the Quran. By Her Own Hand instead showcases rare books and manuscripts by figures including Angela W. Grimke, the first African American woman to publish a play, and influential scientists such as Mary Roberts.

By Her Own Hand covers a range of areas — from science to literature. Readers can find some unexpected volumes as well, including an American-Pakistani cookbook from 1955, featuring 200 bilingual recipes in English and Urdu. Although a simple cookbook from afar, the volume tells a specific cultural story taking place during the “early years of Pakistan’s independence.”

“I’ve started getting fascinated with women’s community cookbooks because at different times in the world, when women didn’t have public authority, they were told, ‘Your sphere is in the home, you’re supposed to be in a domestic space,’” Nesler says. “[But] they could, in really effective, sneaky and underhanded ways, take that authority and use it to actually affect much larger change.”

The cookbook, Nesler says, becomes “one of the most fascinating diplomatic efforts,” because of the free exchange between cultures. Homes and traditions are open suddenly, allowing for a unique relationship between families and different countries during a time of non-inclusivity.

Nesler says the idea for the collection all began during a buying trip in London in 2018. While looking for new rare finds, Nesler noticed a disbound, pamphlet-like publication. Instead of dismissing it and shifting her attention to more readable, undamaged books, she took a closer look. “I pay a lot of attention to disbound pamphlets because a lot of women’s work was published in that format cheaply so that they could distribute it, [and it could be] put it in pockets,” Nesler said. “I happened to look at it and realized this is a first edition of one of Aphra Behn’s plays — and I [had] never heard of it.”

In discovering a 1678 first edition of the playwright’s “Sir Patient Fancy: A Comedy,” Nesler also unearthed her razor-sharp statements regarding sexism against female playwrights. Behn writes, “[W]hy in this age has heaven allowed you more and Women less .… Why should Women not write as well as men?”

Throughout Nesler’s research and teaching career — she received her doctorate from Vanderbilt University in literature and gender studies, with a specialty in 16th and 17th century book history — she focused specifically on women and remembers spending a lot of her time tracking down primary sources and materials on women in the 16th and 17th centuries. “In order to teach those materials I had to get a grant for my book or my research, go find those materials, get reproductions, bring them back to my classroom,” Nesler said

As Nesler found herself moving “further and further away from the research,” she says she decided to shift into special collections. And it was in the publishing world that Nesler met Whitmore, founder and president of Whitmore Rare Books. She joined the team, using her expertise to dream up the rare books catalogs focusing exclusively on women’s writing. When Nesler joined the shop, she took the catalogs in a new direction with “In Pursuit of Equality,” her curated collection of “the women who pushed forward through activism and the men who helped support that work.” It included selections from the 1876 Declaration of Rights of the Women of the United States and Erasmus Darwin’s 1797 call for women’s education. “Whitmore Rare Books’ inaugural women’s catalog is a celebration and a recovery effort, as any collection on women’s history must be,” Nesler wrote.

Whitmore Rare Books often attracts collectors, scholars and curators — like those from the nearby Huntington Library, Art Collections and Botanical Gardens. “A lot of universities have recognized sort of a disparity in their collection,” Whitmore says. When institutions like universities reach out to the shop, Whitmore says, “Miranda’s the person to talk to.”

While By Her Own Hand, will primarily attract collectors and institutions, both Whitmore and Nesler hope it will have a larger impact. For Nesler, the catalog is a tool for groups in academia and beyond who might feel isolated, like “young women getting degrees in the sciences who feel like they’re alone in what’s still a very male-dominated culture.”

And, as Nesler writes in the catalog: “The work of these women’s hands is truly exceptional.”

You can check out the original published post straight from the Los Angeles Times website here:
https://www.latimes.com/books/la-et-jc-by-her-hand-women-rare-books-20190525-story.html