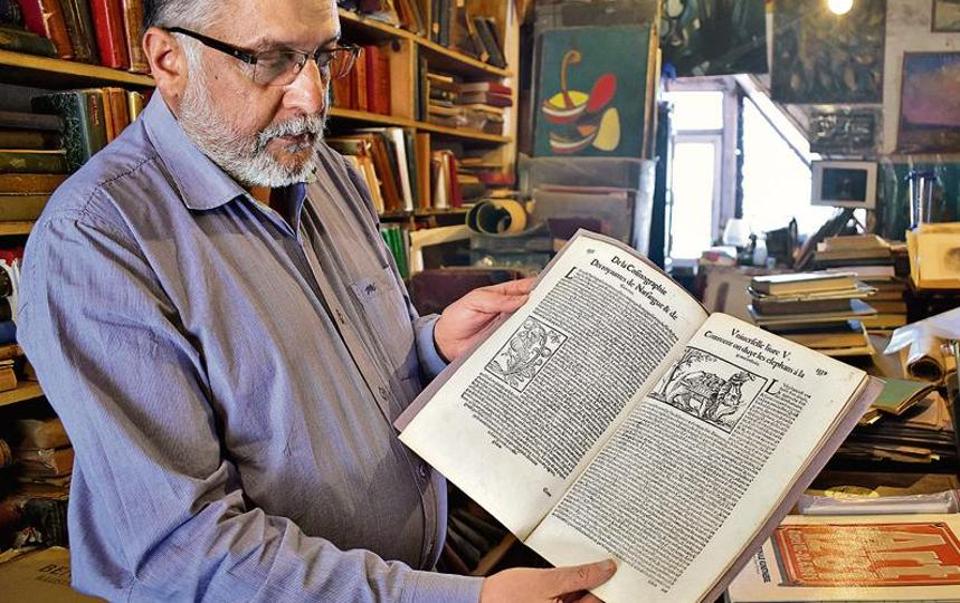 The internet has upended how rare books are valued, bought and sold. But these antiquarian booksellers say they remain as relevant as ever.

This article was published in Hindustan Times. It was written by Manoj Sharma.

Nothing excites them more than the musty smell of ageing books, which they treat as objects of beauty. They travel across continents to track down rare books that rolled off the press hundreds of years ago. They can tell you many fascinating tales of bibliomania, some involving their` own hunts for books. Welcome to the quaint world of antiquarian book dealers.

“In India, most people do not understand what we do; they feel we sell secondhand books. Ours is a dying breed; only a few are left in the country,” says Delhi-based Sanjiv Jain, whose family owns Southex Books, one of the country’s oldest and well-known antiquarian booksellers in South Extension. “Not many people know what it takes to find a rare book. Our search often takes us from the pavement book markets in Delhi and Kolkata to fellow antiquarian dealers in remote European villages.”

On many occasions, Jain says, his search ended at the houses of commoners in England. “Some of them simply refused to sell their books, others asked an astronomical price. I often told them I needed it for personal use, and they relented,” says Jain.

His father GC Jain, an electrical engineer, got into the trade in 1967 in Kolkata and later shifted to Delhi in 1984. Today, the Jains sell mostly to collectors and government institutions. “Delhi and Mumbai have the maximum number of rare book collectors,” says Jain.

Antiquarian booksellers say that a rare book is one which is difficult to find but is much sought after. Even a book from 1850 is not rare if no one wants it. A rare book can cost anywhere from a few thousand to a few lakhs.

In fact, most antiquarian booksellers in India got their early collections in the 1940s from the departing Britishers. Kolkata, India’s publishing hub during the 19th and a major part of the 20th century, and Shimla, once the summer capital of British India, were the places where they found some of the rarest books.

My father started the bookshop in the 1950s and his initials collections came from the personal libraries of British families who were leaving India. Since the weather is good in Shimla, the quality of antiquarian books, and their preservation, has never been a problem,” says Rajiv Sud, proprietor of Maria Brothers, one of the country’s oldest antiquarian bookshops in Shimla, which boasts over 4,000 rare books — most of them Himalayan travelogues. Among his collection is a 1552 brief history of India published in French.

The internet, these antiquarian book dealers say has upended their trade, changing how books are found, valued sold and bought. There are several websites such as Abe, Shapero, Alibris that allow one to search for a rare book using keywords such as author, title, published date, and attributes such as the first edition, signed, jacket, among others.

“While such online platforms have made it very easy to locate books, they have led to a great spike in their costs, making it difficult to buy and offer them to collectors at reasonable prices,” says Raju Singh, who runs Chapter 101 in Gurgaon, a bookshop, which offers a wide range of rare books. The mahogany- panelled bookstore has large posters of Mahatma Gandhi, Nelson Mandela and Bob Dylan. One can hear soft classical symphonies as one enters the shop.

“I have been collecting books since my school days, and the idea behind the shop was to create a beautiful space that inspires people to build their own personal collection. An antiquarian bookseller always keeps an eye out for bookshops. I acquire my rare books from the US and the UK. I like to touch and feel a book before I buy it,” says Singh, who opened the shop in 2016.

Antiquarian booksellers will proudly tell you that the rare books trade is not a business but a “cultural enterprise” as it helps preserve some of the history’s greatest printed materials.

But many rue that the Internet has diminished their trade in many ways.

“Now everyone who approaches us think they know more than us regarding sourcing, valuation, and preserving books. But I do not think we will ever become irrelevant; the internet cannot replace the knowledge acquired through being in the trade for generations,” says Jain. “Antiquarian book dealers will remain relevant as not more than 60 per cent of rare books are available online,” says Govindraju, 83, who runs Rare Books, a bookstore in Chennai’s R A Puram. Interestingly, he sold his entire collection of 20,000 books to a fellow dealer in Chennai a few years back. “I thought I was done with book collecting and selling, but soon I realised collecting is an addiction one can never get over, and built my collection again from scratch.

Every antiquarian book dealer has his own speciality – if some specialise in literature, others in history. Maria Brothers, for example, specialise in Himalayan travelogues. “A rare book dealer must be a booklover. For me, there is no joy like holding a book that was printed centuries ago,” says KKS Murthy, who runs Select Book Shop in Bangalore. Set up by his bibliophilic father KBK Rao in 1945, it is one of the most famous antiquarian bookshops in the country.

The 90-year-old Murthy talks with childlike passion about what he calls his “adventures in finding rare books” while he worked as an aeronautical engineer abroad.

“I used to buy rare books for my father’s shop from dealers, pavement shops, and auctioneers in France, US, Spain,” says Murthy, who took over the shop in 1977. “In Paris, I was most happy when I found a large colour illustrated book on Dasara celebrations during the rule of Sri Krishnaraja Wodeyar, the Maharaja of Mysore. The renowned physicist Sir CV Raman, who was a regular client of my father, had asked for the book.”

The Select Book Shop has a collection of 9,000 rare books — some of them from the 15th century. While Murthy no longer goes book hunting, he says the reputation and sources he has built all over the world ensure that his rare books collection remains as good as ever.

“I cannot travel at this age, but I have a network of friends, relatives, writer, publishers and dealers, who help me locate and buy rare books. Building sources is very necessary in this profession,” says Murthy. He believes that the internet has been good for rare books business as it has made the world of rare books less rarefied. “Unlike in the past, a lot of youngsters now come to my shop. A few days ago, a young engineer walked into my shop out of curiosity. Now he works with me on the weekends. He helps me sell books online. Only yesterday, I sold 15 books online. I share a part of the profits with him,” says Murthy.

These antiquarian booksellers will tell you that one of the joys of their trade is that sometimes they find tucked inside the pages of rare books notes, love letters, tram tickets, and sometimes, important documents. “My father found a copy of the American Declaration of Independence drafted by Thomas Jefferson in 1776 among a stack of rare books he had bought,” says Sud.

Many of these antiquarian booksellers, who pride themselves on their book scouting abilities say there are books they have been searching for decades, but failed to find. “The first edition of Birds of America by John James Audubon is one such book. Similarly, Shakespeare’s First Folio is much sought after, but almost impossible to find,” says Jain. Both he and Sud also deal in rare maps. Jain has a huge collection of maps from the 16th century, by different cartographers including those by Abraham Ortelius, who published his first map in 1564. “Maps of India by James Rene’ll are most sought after.”