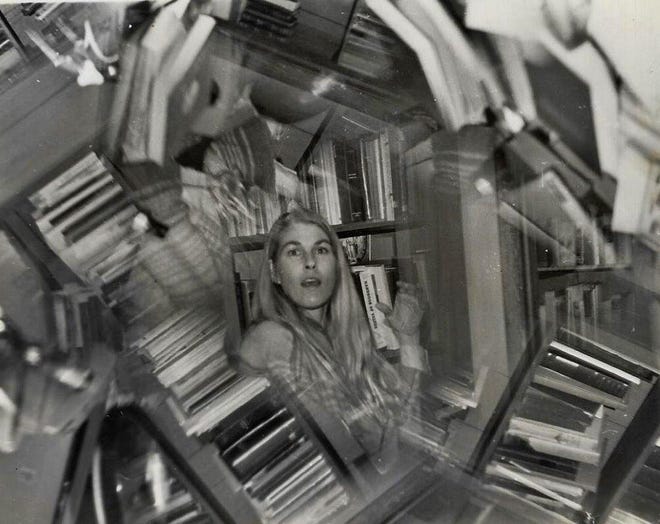 This article was published in Austin American-Statesman by Michael Barnes.

Fairly often when I read or hear about the death of someone, I find myself wishing I’d known that person. Such is the case with Texas rare book dealer Dorothy Sloan, who died on March 14.

Five days later, her daughter, Jasmine Star, alerted me to Sloan’s death, and instantly I fell for her tales about the adventures and intrigues among dealers of Texana.

Born in Houston in 1943, Sloan earned a degree in American studies at the University of Texas. She started her long adventure with rare books when she apprenticed at John Howell Books in San Francisco.

“I was immediately thrown into the heady inside track on rare books, deals, dealers and clients,” Sloan once said. “Every single day was exciting to me and I threw myself wholeheartedly into doing the best job I could.”

In 1979, Sloan returned to Texas where she worked for the much-missed Jenkins Company until 1984.

“Again, I stumbled into an accidental learning experience of unusual depth and opportunity,” Sloan said. “Jenkins had purchased the Eberstadt Collection (and) there were mountains of unprocessed books. It was such a thrill to go through a pile of what appeared to be late 19th-century dilapidated atlases and suddenly find things like a Choris.” (Louis Choris was a German-Russian painter and explorer who died in 1828.)

Specializing in Texana, she opened Dorothy Sloan Rare Books in 1984 at a time when men overwhelmingly dominated the trade. Over the next 36 years she handled gems such as an imperial (very large) folio of Audubon prints and two complete collections of the “Zamorano Eighty,” a list of books meant to represent the most important early volumes of California history.

Although she was shy, Sloan also became a respected auctioneer. And from the stories that Star collected around the country, her mother climbed to the top of her class.

Sloan died at age 77 from a case of advanced dementia that developed rapidly.

“Mercifully so for Dorothy who would not have wanted to linger in that state,” Star wrote in an obituary. “Those who knew her will be glad to learn that, in her final months, she was peaceful and even cheerful.”

The stories about Sloan’s intrepid career — which included identifying forgeries, fakes and stolen materials — came from all over Texas. They include brushes with celebrity. For instance, she helped musician Phil Collins acquire objects for his collection of Alamo artifacts, which he recently donated to the state. From the evidence of their emails, the two became friendly.

One Sloan tale revolves around her attempt to sell a huge painting — measuring about 8-by-17 feet — created in the 1760s and called “The Destruction of Mission San Sabá in the Province of Texas and the Martyrdom of the Fathers Alonso Giraldo de Terreros, Joseph Santiesteban.” It was thought to be the first to depict a historical scene that took place in Texas. Sloan had received the painting on consignment from a prominent family in Mexico City. When claims of cultural patrimony arose, U.S. Customs agents confiscated it from Sloan’s home, which doubled as her bookshop, and returned it to Mexico. It now hangs at the Instituto Nacional de Antropología e Historia in Mexico City.

“She sometimes came across materials that had gone ‘astray’ from various libraries and other institutions,” Star says. “She burned bridges with some of her clients because of her efforts to return those materials to their proper homes.”

Sloan helped important collectors build their libraries, but she did so by her own rigorous rules.

“She was witty, funny and occasionally exasperating,” says Kurt Zimmerman, who worked for Sloan during his graduate school years. “Dorothy’s cataloguing work was superb, but like a fine wine, it took time. One consignor (owner), William Morrow, was in his mid-80s. He waited patiently for her to finish the description of his extensive Texana collection so it could be sold. A six-month estimate of completion turned into two years. Morrow visited unexpectedly one day and, after a fine chat, politely inquired if she was going to finish before he died. Dorothy laughed and assured him she would. She did, just barely. He was ecstatic with the results.”

Texas photography collector Larry Jones talked about Sloan’s help selling his treasures to the DeGolyer Library at SMU, which she also appraised.

“I was at her Duval Street house one day helping her set up a display of material to show a fellow from SMU,” Jones recalls. “Dorothy introduced me to the man -— whose name I have forgotten — and she told me he was one of the regents at SMU. He asked me a couple of questions about what I did and then Dorothy just took over. She told the man that I had the largest private collection of antique and vintage Texas photography in the state.”

The regent asked Jones what he intended to do with his collection.

“I hadn’t given it much thought, but he asked if I minded if he called someone at SMU to tell them about it. I agreed and he got on his cell phone and called the president of SMU and he picked up. After a relatively short conversation with the president, he told me that the DeGolyer Library folks would like to come and see the collection in two days.”

Jones’ house was too small to display the collection properly, so Sloan rented cafeteria tables and put on a show in her larger place.

“The folks from SMU came down, saw the collection and then wanted another group, this time including (library director) Russell Martin, to come and take a look,” Jones says. “We left everything on display for another couple of days before they came down. During that meeting, Dorothy told them that my collection literally was one-of-a-kind and that they were unlikely to ever come across such a robust collection of 19th-century Texas photography. After she told them this, Russell told me that they would like to purchase the collection, and I agreed to sell it, but only after it could be appraised so a realistic value could be determined.”

Sloan did the appraisal and did not ask for her fee in advance, as is often the custom.

W. Thomas Taylor first met Sloan while she was working in San Francisco and got to know her better when she set up shop in Austin.

“Striking out on her own was the first evidence of the courage and enterprise that were so characteristic of her,” Taylor says. “This mattered to me a lot during the period I was investigating the thefts and forgeries of early Texas documents that occurred in the 1960s through the 1980s. She offered me many leads to follow and, just as important, stood up for honesty in the conflicts that ensued.”

Taylor says that a good ol’ boy network dominated the world of antiquarian Texana in those days.

“The men who traded in dubious documents did not appreciate having light thrown on their activities,” Taylor says. “For me it was no particular problem, because I did not regularly deal in Texana, but for Dorothy it was a real risk — the men involved often gave her a hard time for presuming upon their world, and telling the obvious truth about the origins of so many early Texas documents. Dorothy was unwilling to play along. She was, truly, a strong woman. … Whether the guys wanted her or not, she was at the center of the Texas book world for a very long time.”

You can check out the direct link to this article on the Austin American-Statesman website here: