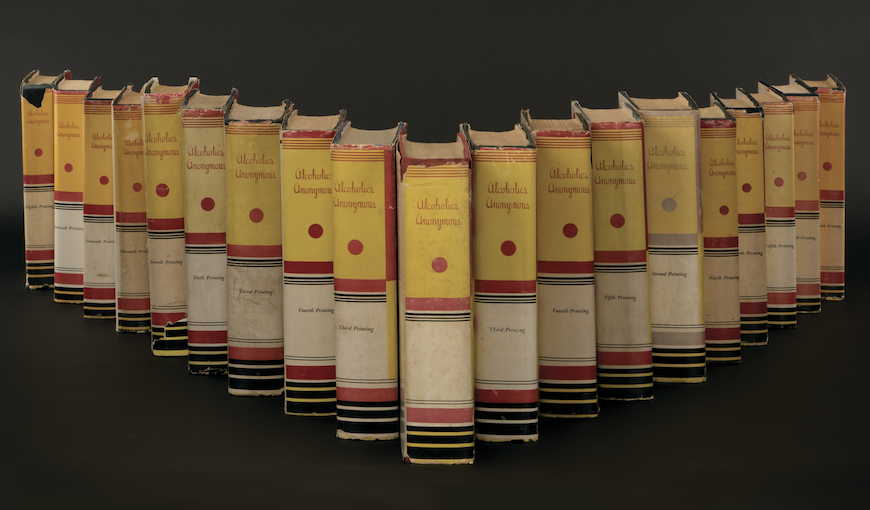 This article was published in Fine Books & Collections Magazine.

Los Angeles — Profiles in History is proud to announce a historic and rare collection of nineteen Alcoholics Anonymous books will be going up for auction on July 11th in Los Angeles. All nineteen books are first edition printings and are signed by the founding members of the AA Fellowship. The importance of this collection cannot be overstated.

They were collected over a lifetime by Ken Roberts, who recently chose Profiles in History to sell the original typed working manuscript for The Big Book of Alcoholics Anonymous. It sold for 2.4 million dollars.

All nineteen books will be a part of a single lot and will also include an exceedingly rare 1940 Bill Wilson stock certificate used to raise funds to continue to print copies of the groundbreaking Big Book. The stock certificate is one of only two known in private hands. Bill Wilson was of course the founder of Alcoholics Anonymous and wrote the Big Book that serves as the bible to millions worldwide.

Michael Fitzpatrick, leading AA historian, speaker and author of four books by Hazelden Publishing, states the following about this collection: “This unprecedented collection is by far the most unique display of early Alcoholics Anonymous material to be revealed since AA began. The 19 books accompanied by the stock certificate tell the early AA story as the fellowship grew from 1939 – 1954.”

William Schaberg, AA expert, antiquarian book dealer and author of Writing the Big Book: The Creation of A.A. (based on 11 years of primary document research and seven years of writing, being published this fall by Central Recovery Press), states the following, “All 19 first edition versions of the Big Book!  All in dust jackets!  All Signed!  This is a truly amazing and unique collection and a once-in-a-lifetime opportunity to acquire them as a complete set!”

This collection is truly the “Holy Grail” of AA books containing all 16 first edition printings in various colors, each in their original dust jackets for a total of 19 books.  The entire collection tells the story of AA’s explosive growth and the printing changes from April 1939 when the book first appeared, through the final printing of the first edition in August 1954. This collection will be accompanied by a signed letter of authenticity by William Schaberg.

Each book is very special and unique, however special attention must be brought to the following four items in the collection.

First is a first edition, first printing of the Big Book from April 1939 in  it’s original jacket, signed by Bill Wilson. Only 4,650 copies were printed, this book is an exceptional find, especially in the highly sought-after original dust jacket.  It’s estimated that fewer than 200 copies still remain in their original dust jacket.  It’s bound in red cloth and inscribed by Bill Wilson, “To Vincent – In great regards – Ever Bill NY Nov 2/56”.

Second is a first edition, second printing from March 1941. This is Hank Parkhurst personal annotated copy.  Hank Parkhurst was New York AA #2.  He was the first sober success that Bill Wilson had in New York, although Hank only stayed dry for four years. Hank was Wilson’s partner in the book project and many AA historians, including Bill Schaberg of Athena Books, have stated that, without Hank, the book never would have happened.

Next is a first edition, seventh printing from January 1945, signed by Bill Wilson.  Apparently AA failed to comply with the government mandate to conserve paper, because this wartime edition was supposed to be drastically reduced in size to conform with government regulations. For whatever reason, AA did a limited run of the seventh printing of likely less than 200 printed while the printing presses were being converted to meet with the new government standards.  The eighth printing followed one month later with a run of 20,000 copies.  Since collecting AA books and memorabilia has become popular over the past 35 years only three Seventh Printing Big Books have surfaced that retain the original dust jacket.  This book not only comes with the elusive dust jacket, but is also signed by Bill Wilson making this particular copy the “crown jewel” of all AA books.

You can check out the original published post straight from the
website here: Fine Books & Collections Magazine
https://www.finebooksmagazine.com/news/holy-grail-aa-big-book-collections-heads-auction