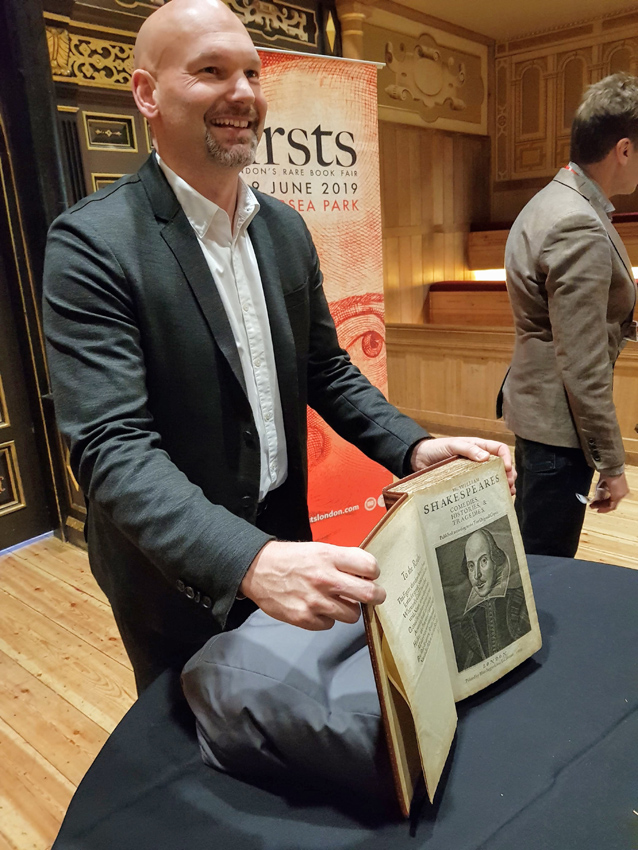 A rare near-complete copy of Shakespeare’s First Folio is included in a loan display at Firsts: London’s Rare Book Fair.

The following article was written by Frances Allitt.

It was unveiled at a special event in Shakespeare’s Globe, the fair’s charity partner, this morning by rare book dealer Pom Harrington. This is the first time the book has left New York since collector John Wolfson acquired it in the 1970s.

Running from June 7-9 at Battersea Evolution, the fair is a rare opportunity to see the Folio on public display. Of the 750 copies published, 235 survive, a third of which are held in the Folger Shakespeare Library in Washington DC, while many others are in institutional or private holdings.

The text was published in London, 1623, seven years after the Bard’s death, and presented 36 of his plays together including 18 for the first time. Without the Folio, it is possible that works such as Macbeth and Twelfth Night would have been lost.

Wolfson, who has bequeathed his extensive assemblage of rare books to the Globe on his death, has selected several highlights from his collection for the show. They are joined by stage props from the Globe and another special exhibition staged by The International Society of Bible Collectors.

Actor Stephen Fry opens the fair, which hosts more than 150 dealers. Wolfson will also speak on the opening day accompanied by actors.

Harrington, chairman of Firsts, said he was “delighted” that visitors would have the chance to see the First Folio, calling it “arguably the most famous book in world literature”.

The fair, now in its 62nd year, is organized by the Antiquarian Booksellers’ Association. This is its first year with its new title, Firsts.

BOOK RECOMMENDATION on the topic of the 232 known copies of the Shakespeare First Folio’s in the world: THE SHAKESPEARE THEFTS, In Search of the First Folios by Eric Rasmussen

Synopsis of the book: Published in 1623, the first edition of William’s Shakespeare’s collected works known as the First Folio, is one of the most sought-after books in the world. Compiled by Shakespeare’s fellow actors, it is the authoritative text of his plays, and copies from its 750-copy print run have been yearned for by kings, earls, and bibliophiles since they first came off the press.
In his effort to track down the extant 232 copies- and to identify others that have been stolen or lost- renowned Shakespeare scholar Eric Rasmussen and his team of First Folio hunters embarked on an incredible adventure around the world. This fast-paced narrative takes us from the courtrooms of England to high-security vaults in the rare book rooms of Japan, back through centuries to Ben Johnson’s cousin, and even takes a look at the notes that a Spanish Inquisitor scribbled on the margins of one copy. In their search to unravel the often circuitous journeys of the volumes, Rasmussen and his team encounter thieves, reclusive librarians, and eccentric billionaires who are all lusting for one of the world’s most valuable books. This fascinating account explores how manuscript hunters identify a book that may have an illegitimate owner and a secret past; how to identify distinguishing marks: a bullet hole, desecrated pages, and red stains that resemble blood; and how a book’s location and condition can reveal its story.
Part literary detective story, part Shakespearean lore, The Shakespeare Thefts is a rare glimpse between the covers of one of the most coveted books in the world.