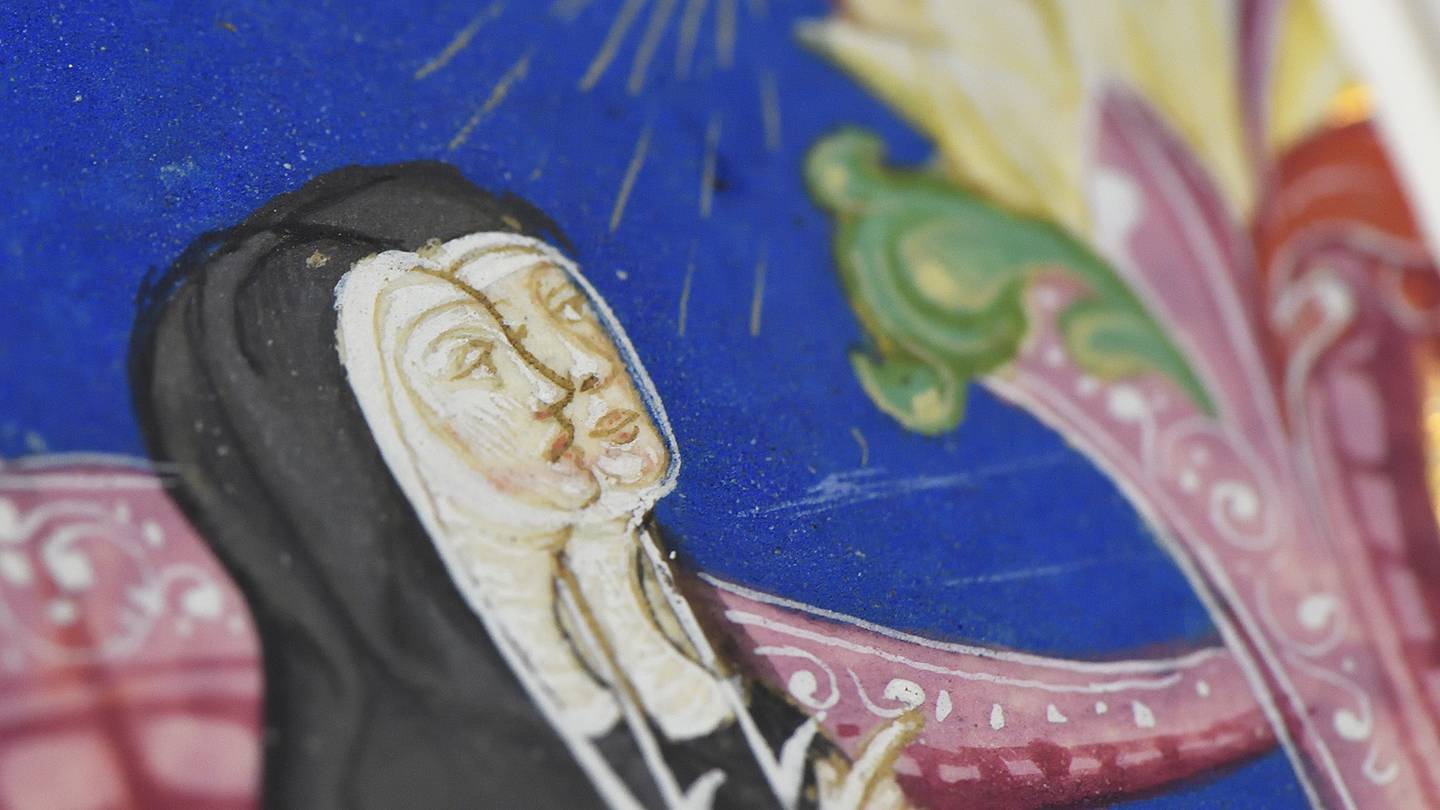 This article was recently published by Johns Hopkins University. It was written by Saralyn Cruickshank.

Orsolya Mednyánszky had crisscrossed the globe, traveling to more than 25 libraries in Europe and the U.S. to conduct research for her dissertation on a collection of 12 medieval texts containing stories of the life of Jesus. But there was one book the Johns Hopkins doctoral candidate didn’t think she’d have the opportunity to study: a 15th-century Roman Catholic processional containing music and instructions for worship. This unique manuscript had been sold in the mid-1900s, trading hands between private collectors and out of reach for scholars of early modern religion like Mednyánszky. Until, miraculously, it wasn’t.

“It popped up in a private collection at Sotheby’s in London last year,” says Mednyánszky, a scholar in the Department of the History of Art. She recognized it immediately from its description because the book has a unique provenance: It was a gift from a monk to his sister, a nun who resided in Lichtenthal Abbey in southwest Germany. An inscription in the book dated the manuscript to 1460. Mednyánszky says she paid little attention to the book’s sale at the time, assuming it would be purchased by another collector.

But last spring, while auditing a class taught by Johns Hopkins Professor Earle Havens, Mednyánszky listened with interest while Havens described a rare book the university had recently acquired. He retrieved it from the stacks in the Milton S. Eisenhower Library and presented it to the class. It was pocket-sized but several inches thick and bound in brown animal hide with elaborate floral tooling. Inside, it contained medieval musical notation and, there in the book’s colophon, a handwritten dedication from Brother Wilhelm Kecheller to his sister Dorothea. It was the book from Lichtenthal Abbey.

“It was kind of surreal—a-once-in-a-lifetime chance to encounter a book that had been lost for so long,” Mednyánszky says.

The manuscript is the oldest in the Sheridan Libraries’ Women of the Book collection, which contains more than 425 books, manuscripts, and other printed ephemera produced between 1460 and 1800. Acquired by the university in 2017, the collection centers on the lives of nuns and holy women in Europe and parts of South America. It includes details of their daily devotions, records of their professions into their convents and religious orders, mystical accounts of their encounters with saints and angels, and even public announcements of their symbolic marriages with Christ. Through their association with the church, these nuns were granted access to tools of the printed word that would enable them to preserve their histories. Collectively, Women of the Book offers a rare look into the lives of early modern women.

“These nuns occupied an interesting creative space that wasn’t generally available to most women in the predominantly patriarchal early modern period in Europe,” says Havens, the curator of rare books and manuscripts for the Sheridan Libraries and the director of the Virginia Fox Stern Center for the History of the Book in the Renaissance. “In a sense, exploring a collection like this presents the only way to dig broadly and deeply into what it was like to be a woman at that time.”

In the handwritten diary of Metilde Benvenuti, an 18th-century nun from San Giuliano, Italy, detailed notes describe the convent’s crèche, or nativity scene, and the extravagant sculptures, clothing, and livestock used in the tableau. The pride Benvenuti took in her role as the keeper of the crèche is evident in the ornamentation she added to her notes: The diary’s title page is emblazoned with a red heart flanked by gilt illustrations representing Jesus and Mary, framed in a zigzagging pattern with scarlet diamonds. “It’s actually quite moving,” Havens says. “She designed this elaborate crèche, whose centerpiece is a newborn child, though her vow of celibacy meant that she could not have children herself. In 1750, she dedicated the book to the glory of Jesus, Mary, and Joseph, the holy family—her family.”

The collection, which debuted in September during a conference for medieval and Renaissance scholars, is already enriching the studies of Johns Hopkins students and researchers. During the conference, researchers from across North America and Europe convened at Johns Hopkins to learn about the collection and see it up close. Erin Rowe, a professor in the Department of History and co-organizer of the conference, says she’s already taken students into the stacks to see the books.

“Even if they come from different centuries or different places, these books reveal the scope and variety of experiences these women had that you might not have expected,” Rowe says. “You come away with a different understanding of them when you see them in relationship to each other.”

“Before, it wasn’t practical for scholars to conduct this type of research because the material is so scattered,” he says. “But we can do it here at Hopkins, now. And that’s the power of the research collection—it brings the world to it.”