All 655 pages are clean and secure to hinge. Contents: part 1. The Universe part 2. Optics and Waves part 3. Mechanics part 4. Electricity and Atomic Structure

In 1956 a group of university physics professors and high school physics teachers, led by MIT’s Jerrold Zacharias and Francis Friedman, formed the Physical Science Study Committee (PSSC) to consider ways of reforming the teaching of introductory courses in physics. Educators had come to realize that textbooks in physics did little to stimulate students’ interest in the subject, failed to teach them to think like physicists, and afforded few opportunities for them to approach problems in the way that a physicist should. In 1957, after the Soviet Union successfully orbited Sputnik , fear spread in the United States that American schools lagged dangerously behind in science. As one response to the perceived Soviet threat the U.S. government increased National Science Foundation funding in support of PSSC objectives.

Extra significant Notes about the images in this book including front and back cover:

Between 1939 and 1961, Berenice Abbott produced a series of photographs demonstrating basic scientific principles. The ‘Science Pictures’, as they were called, led to her being hired to photographically illustrate a new high school physics textbook. Many of these photographs were later published in the books Magnet, Motion, and The Attractive Universe, all in collaboration with the writer Evans G. Valens.

This 1960 first edition of Physics is almost certainly the textbook for which Abbott made her science pictures. Although the books stated publisher is D.C. Heath, it was produced under the aegis of the Educational Services, Inc. (ESI), Physical Science Coordinating Committee, which oversaw an enormous collaborative effort between scientists and academics on both the high school and college level. The book has no chief author, but credit for coordinating the project is given to Dr. Francis L. Friedman, a Professor of Physics at MIT.

Both the front and back cover photographs are by Berenice Abbott, and though she is not specifically credited with making them (these two images are well-known enough to leave no doubt as to their creator), she is mentioned by Dr. Friedman as one of the books primary photographers (in collaboration with James Strickland), and is also on the Contributors list. (Only the First Edition has this cover photo) 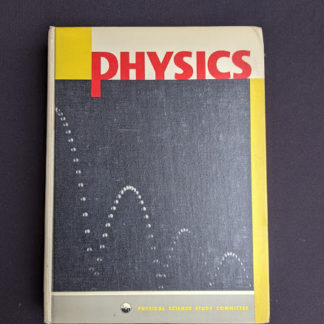