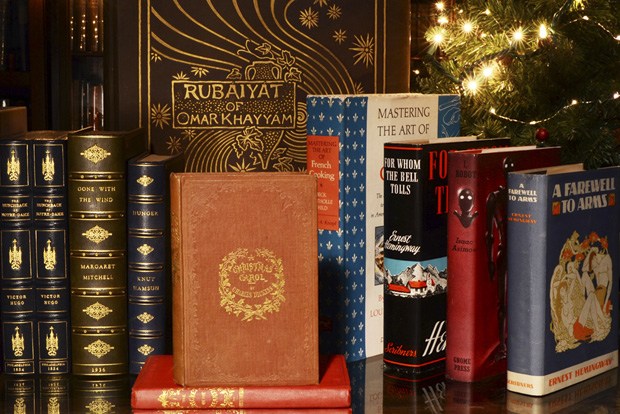 What is a Rare Book?

What makes a book go under the category of RARE?  Are there any set guidelines?

There are many books that are old, antique or unusual but this does not mean that any of them are rare books. To earn the classification of being a rare book, the book must meet a certain set of criteria. However, it is the criteria itself, which has been argued many times amongst bibliophiles, that causes confusion about what is considered a rare book.

According to dictionary.com the definition of a rare book is any book that is hard to find due to its early printing date, limited issue, special character of an edition or binding, or its historical interest. Although these are sometimes the criteria for identifying a rare book, it is not always the case. Possible other factors that may make a book rare include:

Just as the value of a book is relative to supply and demand, in many instances the rarity of a book does not mean it is considered a rare book. There are many books that are scarce in number, almost never seen in auctions or anywhere else and are considered virtually worthless because no one wants them.

How to Identify a Rare Book

Although it is sometimes confusing, there are certain things to look for when trying to identify a rare book.

Just because a book is a first edition, which is the very first printing of a book, does not make it rare. Every book printed has a first edition. The book must meet with other criteria to be classified as a rare first edition. The problem that arises is that there is not a uniform system of numbering editions used by publishers. This often makes identifying a first edition confusing for collectors regardless of whether they are novice or experienced collectors.

Several of the ways publishers use to identify their books as first editions include:

Since each publisher uses their own method of marking their first editions, the best way to determine if a book is the first edition is to use a guidebook or a bibliography of the author. An excellent guide to identifying first edition books is a Pocket Guide to the Identification of First Editions by Bill McBride.

However, there are also many other books that can help act as a guide.  Whether you are an experienced collector or someone embarking on a new hobby, here are my top book suggestions for helping unlock the secrets of locating rare and valuable books.  The books suggested here includes information on first editions and reader’s copies, auctions and catalogs, avoiding costly and common beginner mistakes, strategies of professional “book scouts,” and buying and selling on the Internet. These books cover explaining some of the terms used in the trade including the notion of “Rare” and how to identify, purchase, care for, and sell first editions.

Although there are some general guidelines for categorizing books as RARE for antiquarian books, when a book is described as ‘RARE’ in an online posting, it is more often than not done so at the discretion of the individual describing a particular book. This can be a person selling their book who may or may not have done diligent data collecting or it may be someone with more experience who will know the printing history of the book. If it is the later then it would have a better chance of being given this categorization accurately.

That being said there is truth to be found in the following excerpt from a recently written article, I do not know who authored it.

Rarity still matters. There are only 400 extant copies of the 1896 Kelmscott Chaucer; one is available on AbeBooks for $137,500. Even particularly special reproductions of this book are listed for thousands of dollars. If there were 10,000 copies of this book, it would necessarily be cheaper.

On the other end of the spectrum, a popular magazine usually won’t gain much value: the market is flooded. National Geographic has a print run of 12 million, so there’s always someone looking to get rid of their copies. (That’s why my local library used to sell decades-old copies for 5 cents a pop.) But, says Dr. Belanger, even household names can become rare: “My aunt Agnes collected an entire run of Life magazine, and everybody laughed at her. But the complete set is now worth well into five figures.”

Rarity also applies to the specific edition or even the specific printing. There are millions of copies of The Fellowship of the Ring; you can buy a used copy for five bucks on Amazon, less at many used bookstores. And that’s why the earlier editions are worth more. And one edition of a book can have multiple printings, and that each of these printings may fix small errors or make other tiny changes that set them apart. None of these details would make those early copies valuable, if Fellowship weren’t also highly regarded and widely read.

The first printings of the start of a famous series are usually more valuable than those of the last, because they’re usually rarer. By the time they released Harry Potter and the Deathly Hallows, the seventh book in the series, the publishers knew they’d sell millions of copies. So they ordered a much bigger first printing than they had on The Philosopher’s Stone. Copies of that first printing will be easy to find for a long, long time—especially since so many readers will keep them in excellent condition.

The write up goes on to explain that “desirability” should also always be considered:

“The word rare is a misnomer,” says Dr. Belanger. Plenty of rare books are cheap or even worthless. (Think of a cheap, forgettable novel that only ever sold a thousand copies. Even if you have the last remaining copy, that doesn’t mean anyone wants it.)

Conversely, says Dr. Belanger, “a desirable book is a ‘rare book’ even if it’s not rare.” Certain books are valuable just for their cultural significance, just like other ephemera such as original Woodstock tickets, or the first appearance of Superman, or one of Apple’s first computer manuals. Of course, these artifacts are also relatively rare, because they were intended to be thrown away after a few years or months or days. A high demand only increases value if combined with a low supply.

Tastes and trends play roles as well, however. (When a movie adaption is released whether Pride and prejudice or Nancy Drew, First edition of the book often become temporary Hot property among collectors).

I recently read a novel, “The Man Who Loved Books Too Much”, (to be honest I listened to the 5 part CD audio version I took out from the library in my car between driving my kids around to everything (๑′ᴗ‵๑)).  It’s a riveting read about a man who scammed dozens of Collectible booksellers the money owed for spectacular books he would hoard.  It was all he was obsessed with stealing, collectible books!  Anyways, the author, Allison Hoover Bartlett,  has an interview with many book dealers and the topic of rarity came up.  She writes in the first chapter:

Before the [Antiquarian book] fair, I had learned that there are probably as many definitions of rare as there are book dealers.  Most tend towards the cheeky.  She goes on to write some of these responses she was given when she questioned the seasoned dealers about the concept of “rarity” in labeling Antiquarian and Collectible books;

– “[It is] a book that is worth more now than it was published”.

– “Apparently it wasn’t until the early eighteenth century that scholars attempted to define what makes a book rare”.

She described that on the occasions that people answer seriously, they all agree that rare is highly subjective.

One dealer explained to her that it can be difficult to identify first editions, [particularly in children’s books] (and in books prior to 1900) in part because the edition is not always noted.  That “sometimes you have to look for clues”, and that it is these clues which will lead you to know whether or not the book at hand is rare.

Allison wraps up her discussion of Rarity in relation to collecting books by bringing up “bibliophile”  J. E. Burger, who she spoke to on the subject.  She says that he makes “Monty-Pythonest” distinctions between Rarest, Rarior,  Raresiomos”.

“A books degree of rarity remains subjective.  And the only qualities of rare that collectors and dealers seem to agree on is some combination of scarcity, importance and condition”.

I pulled this quote from the book mentioned above called The Man Who Loved Books Too Much, by Allison Bartlett. Because I listened to it on Audio cassette I forget who was being quoted saying this.  However after myself, talking to many collectors on the topic of Rarity I come to the same consensus.

And just to see if your sitting on a gold mine and ‘didn’t-know-it‘ \(★ω★)/  here is a great resource link: https://lifehacker.com/how-to-identify-collect-and-sell-rare-books-1830542345 ‘, this is a fun quick read:
https://www.rd.com/culture/rare-books-worth-a-fortune/