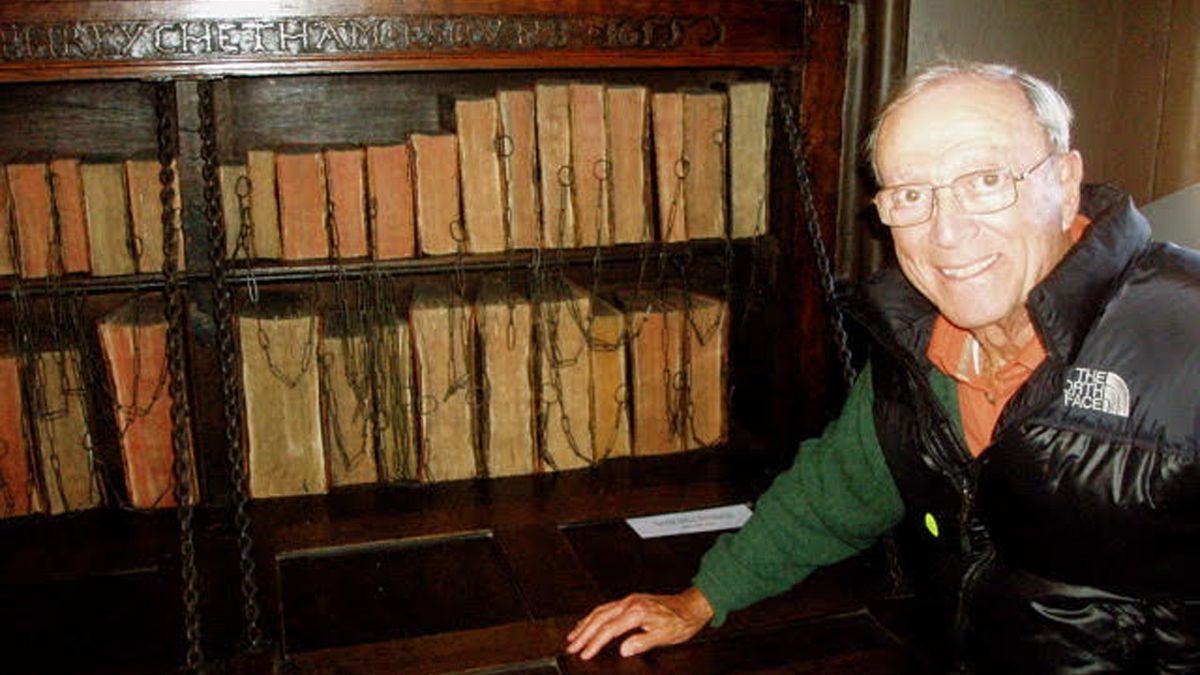 The North Shore resident was a world-renowned dealer in antiquarian maps, books and manuscripts.

This article was published in the Chicago Sun Times by Maureen O’Donnell.

Instead of opening a book when he turned in for the night, Ken Nebenzahl would study the eight-feet-by-10-feet National Geographic map on his bedroom ceiling.

Which had to go there because it was too big for the walls.

Just when his wife Jossy thought he’d fallen asleep, she’d hear an exclamation from the other side of the bed — usually along the lines of “My God, I see the Indus River runs west. I thought it ran due north.”

Mr. Nebenzahl, a world-renowned dealer in antiquarian maps, books and manuscripts who wrote six books on antique maps that have been translated into six languages, died Jan. 29 at his North Shore home at 92.

“He was the dean of antiquarian American map dealers,” said Bob Karrow, retired curator of maps and special collections at Chicago’s Newberry Library.

“Ken Nebenzahl was one of the foremost book dealers of the second half of the 20th century,” said Margaret Ford, international head of books and manuscripts at Christie’s headquarters in London. “He handled some of the most important books and maps on the market and shaped collections, both private and institutional.”

And, Ford said, “He had real charm and was great fun, too.”

At 10, when his friends were collecting marbles, young Ken had his own treasures: road maps of what were then all 48 of the United States.

“I’ve been one of the lucky people who has done for 50 years literally what I would have been doing fiddling around after hours at night anyway, and I’ve been able to make a career out of it,” he said in a 2007 interview with C-SPAN. “I consider myself a very fortunate person.”

Mr. Nebenzahl worked for private collectors, at one point helping acquire a copy of the Declaration of Independence that was then bestowed on the Chicago History Museum.

In 1969, acting on behalf of philanthropist Mary W. Runnells, he paid $216,000 for a first edition of what’s been called one of the world’s most beautiful books: John James Audubon’s “Birds of America.” Sotheby’s Auction House said at the time it was a record bid for a book. Mr. Nebenzahl oversaw its donation to the Field Museum.

The book actually is four volumes long, with 435 brilliantly colored, 40-by-30 inch prints created by Audubon, a painter-ornithologist, between 1827 and 1838. It’s one of only two in the world with 13 extra illustrations, according to Rings.

Some of his antique maps depicted California as an island. That’s because early cartographers hadn’t known the Bay of California didn’t separate it from the continent, according to Jossy, his partner in Kenneth Nebenzahl Inc., which they operated at 333 N. Michigan Ave. She handled the business side. He hunted for acquisitions.

“I did all the rather boring stuff, and he did all the exciting stuff,” she said. “And, between the two of us, we put it all together.”

Mr. Nebenzahl grew up in New York — in Far Rockaway, Queens. He was just 11 when his father, a lawyer, died.

As a kid, he was enthralled with the free maps the big oil companies used to offer at gas stations.

“One time, he even wrote to the oil company to tell them that they had county line such-and-such on the wrong side of a certain road,” his wife said. “He would read maps like you and I would read a book.”

He went to Columbia University and served in the Marines during the final days of World War II.

He and his future wife met on a blind date in New Orleans. Jocelyn Spitz was a student at Sophie Newcomb College and a granddaughter of Max Hart, one of the founders of suitmaker Hart Schaffner & Marx. He was working for the wine distributor Fromm & Sichel.

When he came to pick her up, she said she peeked through the dorm blinds and told her housemother, “That’s the man I’m going to marry.”

He felt it, too. On their second date, he proposed.

But when she told her father about her eager suitor, “He said, ‘What kind of a Slippery Sam-Dapper Dan is this?’ He actually said this.”

Then, he met Mr. Nebenzahl and approved.

As Mr. Nebenzahl pored over maps, he recognized subtle variations and clues to their origins.

“He was very interested in how borders change in different years, and that’s how you could tell if you had a first edition,” his wife said. “Just a tiny detail, just a little squiggly line.”

She said that one time a man called from Texas, saying he wanted to authenticate a map linked to Sir Francis Drake, the 16th century English sea captain and explorer.

“He came to Chicago with two heavies with pistols in their jackets,” she said.

Mr. Nebenzahl determined the map was the real thing.

And the agent waved him on with a chipper, “Happy Fourth of July!”

He and his wife traveled the world, visiting distant places including Bhutan, Burma, Guatemala, Greenland, Haiti, Mongolia, Morocco, Oman, Pakistan and Tibet. They often roughed it and occasionally navigated by camel. One time, his wife said, “We went 500 miles in a 50-foot dugout canoe in Papua New Guinea.”

And it didn’t matter whether they were camping in the American West or circumnavigating the globe by plane, “He always took maps,” his wife said. “And he never got lost.”

When the couple’s three daughters each turned 12, he took them on international trips. Patricia went to Tunisia, Margaret to Turkey and Soozie to St. Petersburg.

In 1966, the couple founded the Newberry’s Kenneth Nebenzahl Jr. cartography lectures, named for their son, who died when he was a boy. The lectures have continued for more than half a century.

Mr. Nebenzahl also is survived by seven grandchildren and four great-grandchildren. A celebration of his life is being planned and will be held at The Newberry library.

Click here to read the Obituary for Kenneth Nebenzahl