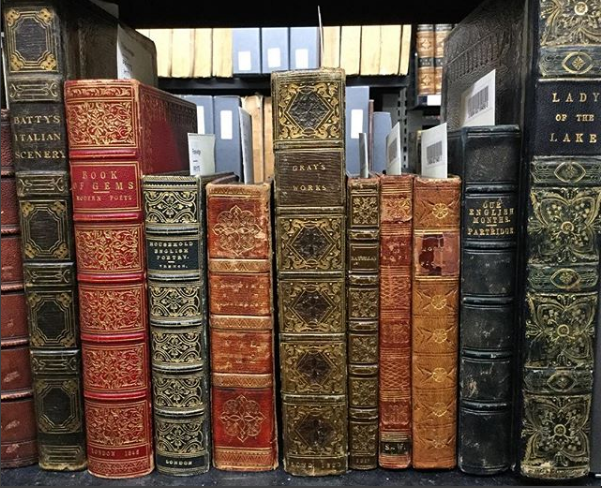 There are many terms used among Antiquarian book dealers and collectors that can be confusing for anyone “new to the game” of collecting.  Here is an abbreviated list of many of the most commonly encountered terms when referring to old, rare, and out-of-print books.

Incunabula is Latin for “in the cradle,” and it generally refers to books printed before 1501.  Any book from this era would be considered and incredible find.

Book club editions (BCE) issued by mail-order book clubs (the best known of which is the Book of the Month Club) sometimes look exactly like the true first editions and may even state “First Edition” on the copyright page.  The distinctions – lower paper quality, smaller format, different boards or endpapers – are tough for the untrained to spot.  Lack of a price on the jacket is the best clue that a book is a BCE; even so, they can fool you.

A point or point of issue, in this context is bibliographical change or irregularity, such as a misprint, a textual variation, or a paper or binding material change between various copies of the same book.  Mistakes are remedied and changes are made in the middle of a print run, which means, for example, some books will have a typo on page 5, and some will not.  Since collectors tend to pursue the earliest issue of a given book – the first off the press – points help them determine priority.

Ephemera comes from the Greek word ephemeron. In the world of books and paper, it means something written or printed that is meant for temporary use and then typically discarded, such as tickets, greeting cards, cigar box labels, leaflets, packaging, invitations and advertisements. Some major collection are devoted entirely to particular types of ephemera.

Here is a link to individual sellers posting Collectible Ephemera for sale.

Private press also sometimes called fine press, refers to a type of publisher that prints only books of her or his own choosing, often with an eye toward artistic rather than financial goals.  The books typically have high production values, are limited to a certain number of editions, and are sometimes sold by subscription.  Strictly speaking, writes John Carter in ABC for Book Collectors (first published in 1952), the term should only apply to work that has been hand-set and hand-printed.

Vellum is the treated skin of a calf, used for writing, printing, and binding.  It is both durable and beautiful.  As an alternative to paper, fine press and private press publishers will sometimes issue special, limited copies of a book printed on vellum

Endpaper refers to the sometimes decorative paper pasted down to the inside front and back cover of a book – a.k.a pastedown – and its component “free” endpaper that appears before the title page.

Doublure is a Drench term that means that the endpaper is leather, instead of paper, and usually decorated.

Morocco is leather made from goatskin.  Amenable to dyeing, the leather is a top choice for fine bookbinding.

Parchment is animal skin processed for use as a writing surface.  Like vellum (calf only), it is used in the production of fine and limited editions as an alternative to paper.

Comic book collecting has a lingo that can be different from rare book jargon, but the term unrestored seems to migrate well.  It refers to a book that has not been enhanced or “sophisticated” in any way, for example, by replacement of missing pages, recoloring of images, stain or stamp removal, and so on.  By and large, collectors prefer unrestored books.

Provenance refers to a book’s historic ownership, which is interpreted through  marks or annotations left by former owners, including signatures, bookplates, labels, coats of arms, stamps, and armorial bindings.

The term association copy typically refers to a book once owned by, but not necessarily written by, the author (or someone associated with the book’s production, or perhaps just someone “famous”) that has been gifted to someone else, usually with a lengthy inscription or annotations.  It can be tricky to distinguish from a presentation copy, a copy, a copy of an author’s book signed and given (with his or her “compliments”) to someone not specifically associated with the book, or an inscribed copy, in which the author adds a message or note in addition to his or her signature.

Bibliography is the study of study of books as physical objects, although the term is also familiarly used to refer to a comprehensive list of works by any one author, or a list of works consulted in the writing of a research paper.

Descriptive bibliography is the systematic analysis of the physical elements of a volume, such as size and format, type, paper, pagination, illustrations, binding material, sewing structure, and more.  It can be very complicated! Piracies and reprints can be truly confusing, which is why the study of descriptive bibliography can be useful for collectors, especially those who concentrate on works printed before 1850.

Marginalia refers to notes, scribbles, comments, doodles, and so on written into the margins of a book by its reader.

A watermark is a mark or design embedded in handmade paper that is typically visible when the page is held against the light.  For scholars, a watermark often provides information that can be used to date a price of paper and to determine its geographic origin.

Imperfect is a bibliographical term used to describe the physical condition of a book or manuscript that is lacking something substantial – for example, an entire chapter or section.  Many collectors scorn such faulty books, but collectors of early printed books, unless they are millionaires, must live with imperfection.  Joel Silver, director and rare books curator at Indiana University’s Lilly Library, wrote a wonderful article in Fine Books & Collections, Spring 2014, on why forgiving a book’s flaws is “a healthy thing for both collectors and booksellers.”

In [certain] context, signature does not mean an author’s handwritten name! It refers to a gathering or section of pages from a book that was printed by hand press (pre-1830, or private press).  The signature is produced by folding a printed sheet once, twice, or four times, making four, eight, or sixteen pages to fit to be sewed and bound.  An indicating letter printed in the lower margin acts as a guide for the binder.

Illumination means that the book was embellished by hand in gold, silver or colored paint.  The amount of illumination can range from decorated initial letters or marginal drawings to full-page illustrations, such as those found in medieval and early modern manuscripts.

A historical initial is a large letter at the beginning of a paragraph or a section in the text that contains an illustration of a figure or a scene.  It is a common graphic feature in illuminated manuscripts.

Artist’s books comprise a broad category of conceptual artworks envisioned by artists as art in a book form, rather than merely a book illustrated with images or photos.  Typically, the artist wields control over the entire production, and publishes it in a small or unique edition. Artist’s books (a.k.a livres d’artiste) take many forms: acrolls, accordion-style books, loose plates in a custom box, photobooks, and book-like sculptural objects.

A printer’s device is an ornamental mark or illustration that serves to identify the publisher.  In its earliest incarnation,  it appeared with the colophon at the end of the book; later it took its place on the title page.  In modern times, a printer’s device – or logo, if you will – is most often noticed at the bottom of a book’s spine.  In the industry, this is often (and erroneously) referred to as the colophon.  Traditionally, a colophon is a note placed at the end of the book providing information about the author, printer, place of printing, date, and so on, plus the printer’s device.  Today, this textual formality survives in private press productions and books by lofty mainstream publishers.

The above definitions were all excerpts taken from the book, Rare Books uncovered – True Stories of Fantastic Finds in Unlikely Places – by Rebecca Rego Barry.

2 thoughts on “A Glossary for Rare Book Collecting”